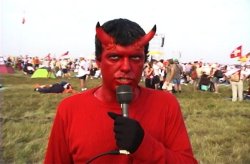 The Papal Chase follows director Kenny Hotz's hilarious quest to meet the Pope. When a friend bets him $1,000 he can't meet the Pope during his 2002 visit to Toronto, Hotz accepts, figuring it will be an easy task. He soon discovers fake press credentials and charm can only get you so close to the world's most heavily guarded person. An irreverent story of faith, obsession, and one man's devout attempt to win the toughest bet of his life, The Papal Chase is as provocative as it is farcical. Disguised in persona's that include a Italian priest, and Satan himself, Hotz ( Pitch , GSN's Kenny Vs. Spenny ) stretches the limits of freedom of speech during the 2002 World Youth Day celebrations, talking his way through millions of zealous pilgrims, annoyed cops, suspicious security guards, ominous snipers, and the international media. With a light touch, Hotz examines such issues as the power of faith and the existence of God. Absurd, hysterical, and often contentious, you can't help but pull for this self-proclaimed "Pope-arazzi" to come face to face with the closest man to God. (Winner of the Phillip Borsos Award for Best Canadian Film 2004 and the Audience award at the Canadian film makers Festival 2005)

Hotz was conceived and raised in Toronto and at seven, he directed his first film. Hotz became an accomplished filmmaker/photographer and traveled all over the world. In 1991, he became the only registered Canadian artist to cover the Gulf War. His work can currently be seen in the Provincial Archives and seven Canadian museums. Upon graduation from Ryerson University Media Arts in 1992 Hotz began working on an acclaimed nominated short comedic film about the life and death of a homeless, fouled-mouthed dwarf named SHORTY GORDY. Hotz then went on to write four, feature-length comedy scripts. In 1996, while trying to attach a star to his script, Hotz came up with the idea to record the process. PITCH documents Hotz and his writing partner as they try and sell their script. In 1999 Hotz came to Los Angeles to develop television programming. Hotz then starred and produced 26 episodes of KENNY VS SPENNY. The series airs in numerous countries, and sold format rights in 20 territories. Hotz is currently producing a 2nd season of the show and was recently on CONAN O'BRIEN. He is hawking "THE PAPAL CHASE", a documentary about trying to meet the Pope. The film has cameos by "The Rolling Stones" and Pope John Paul II. Hotz won the acclaimed Borsos Award for Best Canadian Feature in 2004, and the "people choice award" at the Canadian Film makers Festival in 2005. Kenny is currently working on his next feature film in association with Films Transit International.

Director Kenny Hotz, Producers Paul Johnson & Ben Marshall will be available for Q&A after the screening.