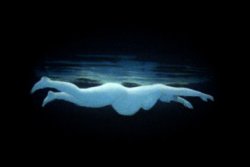 When I was two months old, my mother abandoned me to my grandmother. She could no longer bear the sound of my incessant crying. I decided to make a film in order to revisit our past, with the women who were touched by this depression (my mother, my grandmother and myself). Symbolically, these women are universal because there is no face to post-partum depression.

Born in Murdochville, Quebec, Marie-Josée Saint-Pierre is a filmmaker based in Montreal, Canada. Saint-Pierre has a B.F.A. Honors in Film Animation (2002) as well as an M.F.A. in Film Production (2005), both degrees from The Mel Hoppenheim School of Cinema (Concordia University). Saint-Pierre's documentary work shows new approaches , blurring the lines between documentary and drama. The multi award winning director and film animator has directed several short animation and documentary films including Post-Partum and McLaren's Negatives (2007 JUTRA award winner for best animated film). She founded MJSTP Films, an animation and documentary production company in 2004 Overall, her work has been screened in prestigious festivals all around the world and received many awards. She has lectured in the art of the animated documentary in Europe and in Canada.