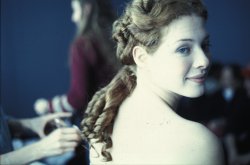 1850: First mass-production of vulcanized rubber condoms. 1851: Elias Howe receives patent for an "Automatic, Continuous Clothing Closure" (zipper) 1889: The Eiffel Tower is completed for the Parisian World Fair of the same year BUT, one detail that the history books never mention is that the World Ended that same year in 1889, in Paris. Just then, Lucifer & the Archangel Michael hatched a successful plan, followed it through, overcoming perilous obstacles, and got the job done. For the first time, our film documents and re-creates the End of the World as it really occurred.

In July 1973, Carl Laudan was born in Vancouver, B.C., Canada. He went to good schools, mostly. He encountered Kevin Smith as a classmate at Film school (who likely doesn't remember him). Carl has lived in many places, and keeps on moving every four years. He is presently producing and directing his first feature film written by Katherine Schlemmer, entitled "Sheltered Life", and is actively seeking investment.

Actor Robin Wilcock will be available for Q&A after the screening.