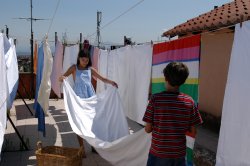 Leo is a very quiet boy who would like to introduce himself to his neighbour who studies on the opposite terrace.

Alessandro Celli is an Italian/Canadian film student who is in the final year of the MA program at the LONDON FILM SCHOOL. He Grew up in Rome (Italy) where he very soon developed an interest for visual storytelling. Well before shooting his first experimental films on camcorders, he had already focused on comic books with the idea of developing a graphic style. After graduating in Economics where he specialized in techniques for Marketing and Publicity, he worked for a year in TV Commercials. He then moved to attend film school in London, where he lived in for 2 years. He will be based in Rome where he has just finished editing his graduation film.