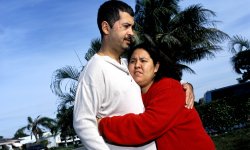 The film tells the story of 5 young American soldiers who were badly wounded in the Iraq war. Back from Iraq they try to rebuild their lives. Suprisingly, they all share the same dream of going back into the army. An army that doesn't need them anymore. Based on photographs by Nina Berman.

Roel van Broekhoven (1950) works since 1975 for the Dutch Public VPRO radio and television. As staff editor/director he travelled all around the world making documentaries and tv series on international issues.

Director Roel van Broekhoven will be available for Q&A after the screening.