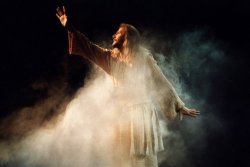 Branson, Missouri. Some call it the new Nashville or the Las Vegas of the Bible Belt. Over the past ten years, nearly 40 theaters have shot out of the ground in this once sleepy Ozark Mountain town of less than 4000. Here, country legends and television and stage stars from yesteryear have reincarnated themselves to offer up good ol' patriotic, Christian entertainment to six million tourists annually. In a light-hearted, ironic manner, Heaven On Earth takes a look behind the scenes at the creation of a mythical America. In addition to numerous song and dance numbers and the spectacular resurrection of Jesus in the musical The Promise, the film features the largest Veteran's Day celebration in the United States, including a rare interview with General Paul Tibbets, pilot of the Enola Gay, reflecting on his dropping of the first atomic bomb on Hiroshima.

Rick Minnich studied at Columbia University, Cal Arts, the Film & Television Academy "Konrad Wolf" in Potsdam, Germany and in Vienna. After travelling around Eastern and Central Europe, he settled in Berlin in 1990, where he has worked as a dishwasher, English teacher, translator, and filmmaker. His award-winning films have shown at festivals worldwide and have been broadcast on television throughout Europe.