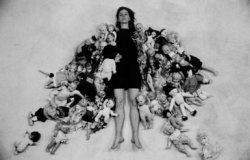 Tra La La is a poetical reflection on the ephemeral nature of innocence and childhood. It magically combines live action with chalk drawing animation to create a black and white tale where three young women lead us through the lost imaginary realm of their past.

Magali Charrier is a French filmmaker based in Brighton. Her rich and eclectic background in arts, live performance and animation has led her into developing a unique cinematographic style and a very personal visual approach to the medium of dance and film. She has been making films since 2001 and her award winning work has been broadcast and toured internationally. In 2004, she took part in the UK/Canada Exchange Program which resulted in the production of Tralala, a 3 minute film commissioned and broadcast by Channel 4. She is now working on a short fiction commissioned by Screen South and the UK Film Council.