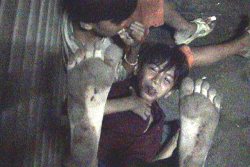 A short documentary on how one family lives out each day to earn their daily bread. How one man's trash is literally transformed into this family's treasure.

Khavn De La Cruz is a filmmaker, writer, and musician based in Quezon City. Since 2002, he has been the festival director of the .MOV International Digital Film Festival. With his independent film company Filmless Films, he has produced ten digital features and more than forty short films, several of which have won prizes in the Philippines, Tokyo, Spain and Italy. He has been invited twice to the Berlinale Talent Campus, and has received the Hubert Bals Fund grant thrice. His latest project "Mondomanila" was recently included in the Berlinale Co-Production Market. Singer, songwriter, and pianist of The Brockas, Khavn has directed music videos, written & composed two rock operas, and received citations for his songs from the John Lennon Songwriting Contest (USA) and Metropop. He has also won in the Palanca Awards for his fiction and poetry, has been a Fellow twice in the National Writers Workshop, and has taught in the Ateneo De Manila University, his alma mater. He has written two novels, a book of short stories, and several collections of poetry, two of which will be published this year by the University Of The Philippines Press and University Of Santo Tomas Press.