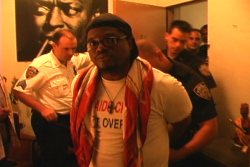 A family is forcefully evicted from a Harlem apartment.

Born, raised and still living in Brooklyn, Steve Loff studied film production at CUNY's Brooklyn College. Producer, Director, Shooter, Editor - Steve has worked in all facets of film and video production. He is co-founder of GO Pictures. Producer of 3 indie films, including the award-winning "Home," and "Remedy." His first directing effort, "Pepsi Won," has played all over the world.

Prichard Smith, Producer and Anthony Williams, Tenant Rights Advocate will be available for Q&A after the screening.