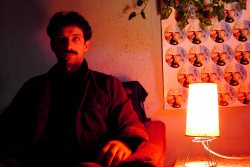 Andrei, a 13 year old teenager, living on Bucharest outskirts, decides one day to steal a trolleybus in order to impress Marilena, a prostitute he fell in love with. Things you do for love...

Cristian Nemescu - born on the 31st of March 1979. He has graduated The Romanian National University of Film "I.L. Caragiale" in 2003. Presently he is preparing his first feature film, that won a script contest for financing at The National Center of Cinematography (CNC). His graduation film, "C" Block Story, has been screened in various film festivals, has received several awards and got a nomination for "best short film" for the European Film Academy's Awards, in 2004.

40% of the film budget ($35,000) arrived from the festivals cash prizes won by the filmmaker's previous shorts.

Screenwriter Tudor Voican will be available for Q&A after the screening.