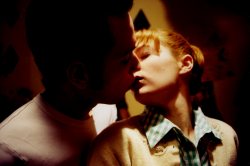 1959. In a world of teenage lust and twisted morals, of drive-in movies and rock 'n' roll, it is hard to keep one's innocence. With a simple roll of the dice, the child becomes a predator. The saint, a sinner. At the tender age of 18, Dakota Thompson, became a real life junkie. Now, as she is being treated for her addiction, Dakota's life and downfall flash before her eyes. Watch her, as she struggles to keep herself pure in a world of desperate teens. Watch her, as she fails to fight peer pressure and descend into addiction. Watch her, and ask yourself, could you have saved Dakota Thompson?

Born in Israel in 1981, Oren Shai completed his first short film, "Rocking", a tale of 1950's delinquents who terrorize a mutation of an Israeli suburb, in 1999. 6 years, 5 short films, 2 music video, a tv show, MTV2 Promo and 4 years of school later he completed "Heavy Soul" in New York City, USA and looks forward towards his future endeavors in the industry.

Director Oren Shai will be available for Q&A after the screening.