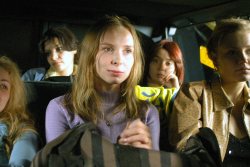 WHAT A WONDERFUL PLACE

Franco, an ex- policeman, who became an agent for a violent gangster, rediscovers himself with the help of Jana, a prostitute from Ukraine. Zeltzer, a melancholic farmer follows the tracks of Jana's photograph only to find out that the only person he can trust is one of his Thai workers, Visit. Aloni, A tough ranger, persecutes the Thai workers for illegal hunting as he finds himself preoccupied with his handicap father. The only one who can assist the ranger is Eddie, a Filipino caretaker. Eddie is addicted to gambling and becomes involved with the the Boss, the violent gangster from the first story. All the characters eventually reach the same point in the desert - for different reasons, and one dramatic resolution.

Eyal Halfon was born in Natanya, Israel. He Graduated from Tel-Aviv University where he studied History at the Faculty of Humanities. He was a journalist for many years. Nowadays Eyal Halfon is an eminent filmmaker and creates both fictional and documentary films.