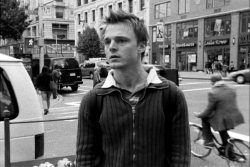 Teenager follows the couple he ran into on the street of Chelsea. They then go to the Chelsea flea market. It is in the end, in Brooklyn cort-yard, that we find out what was the connection between all of these people.

Born in 1978in Kyiv, Ukraine, Bohdana Smyrnova has graduated from Kyiv State Institute of Theatrical Arts in 2000. Her thesis film "Les demarches des papiers" was well received on numerous filmfestivals and won 5 awards. It was acquired by Court Metrage Agency in Paris for the national theatrical release. In 2005 she was selected for the filmmaking program in Tisch School if the Arts in New York University. "Dad, Look..." is her first film shot away from Ukraine, it is also her first film shot for NYU.

Lesya Kalynska and Jay Sullivan will be available for Q&A after the screening.