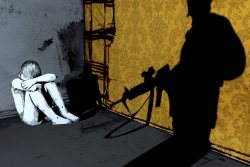 Created as a fictional back story to the global problem of the displacement of peoples, Black Day to Freedom portrays a city in turmoil with the loss and tragedy of a young family at the center of the tale.

Rob Chiu founded The Ronin as a motion graphics and design for print studio in May 2000. His work has been featured in a number of design and motion publications including Grafik, Computer Arts, Digit, Hype, IdN, Stash, Showreel and Cre@te Online. Rob has also contributed work to a number of film festivals and exhibitions including ResFest, Onedotzero, Semi Permanent, Computer Love Offline and the Edinburgh Film Festival and has spoken at a number of design conferences including FMX, Toca-Me, BD4D, Digital Arts World and Media Elements. Recently his short film - Dimensions - for Channel Four/APT films won 2 awards at the BANFF Film Festival and was nominated for both a Mental Health Media Award and a Grierson Award as part of the Animated Minds series. Currently a news editor at design portals BD4D and French 'n' Fresh Rob also lecturers at the MMU School of Design and more recently has expanded his role under The Ronin to also accommodate the role of creative director of Beyond Magazine which had a sucessfull launch of issue 1 : Black Day to Freedom at the ICA in London at the end of May 2005