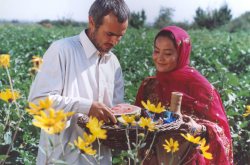 THE LAST QUEEN OF THE EARTH

A simple yet powerful film about a young Afghani immigrant who works in a Henna grinding factory in Iran. As a US-led attack becomes more likely in the wake of 9/11, he attempts to return to Afghanistan to find his wife and family before war and chaos make it all but impossible.

Mohammad Reza was orn in 1966 in Tehran. Arab began his artistic career with making documentaries. He has also produced and directed some TV series. Arab was awarded many prizes for his success in the field of cinema.

Director Mr.Mohammad Reza Arab, the International Affairs Manager Mrs Maryam Naghibi will be available for Q&A after the screening.