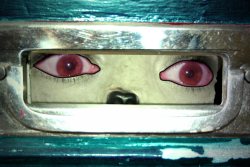 Lonely Bunny has an unusual admirer whose desperate attempts to get her attention intrigues her. In this dark fairy tale, emptiness is substituted for desire as Bunny gets closer to meeting her mysterious suitor.

Leigh Hodgkinson graduated from the University of Hull in 1995 with a First in graphic design. 1999 saw her starting a post-graduate course in Animation Direction at the National Film and Television School where she made two short animated films, "Excess Baggage" and "Novelty". "Novelty" has since toured festivals worldwide bringing home numerous awards including the 2002 British Animation Award for Best Creative Use of New Media. Since leaving the NFTS, Leigh has made a further three films; the first, "Matryoshka", was for Sonimation, a sound and animation collaboration commission that toured the UK in 2001. The second, "Sprung", was a one minute film which was made on channel 4's 2001 TV series "Celmates", where 5 animators were locked in a room for 72 hours with only pencils, computers and their wits and left to create a film. The third, "Moo(n)", a Channel 4/AIR commission, was completed in 2003 and is still being screened at festivals internationally. "Moo(n)" has won several awards and commendations, and was selected for The Sundance Film Festival 2004. Leighs latest short film "Stalk" was commissioned as part of the Pulse scheme with the London Film Fund. She has recently completed work at Tiger Aspect as art director for a new 26 episode animated series called "Charlie and Lola", based on the books by Lauren Child.