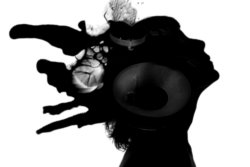 A scientist discovers the incredible power of ultra-low audio frequencies while experimenting in his bizarre laboratory. Amid rats, electronic equipment and a collection of obscure tools he embarks on a secret mission investigating the potential of sonic weapons. During a breakthrough, he identifies a frequency specifically dangerous to living organisms. But through a manufacturing mistake at the record factory, his sounds hit the public where they have drastic effects...

Jasmin Jodry has freelanced as a designer and director in LA, New York and London. Some of her latest work include 2 music videos for Kode 9, projections for Elton John and Zero 7 as well as projections for experimental dance projects. Her previous work as an animator focused on maintitle sequences such as Monsoon Wedding, Normal and Spider-Man. She was nominated for an Emmy in 2003. Her work as a director has been screened, broadcasted and exhibited in various galleries, festivals and TV stations. Degrees include a BA in Graphic Design from Art Center College of Design in Pasadena and an MA in Communication Art and Design from the Royal College of Art in London. Mo Stoebe graduated from film school in Los Angeles where he continued to work in post-production and motion graphics. He has directed numerous short films and music videos, worked on a title sequence for Ridley Scotts "Black Hawk Down" as well as published a feature-length documentary about the Burning Man Festival. Mo holds a master's degree in communication design from The Royal College of Art. He currently lives and works as a freelance director in London.