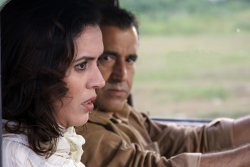 Saïd drives through the streets of Casablanca like a lost soul. At twilight, he comes across Leila in a deserted street, as astray as him. Saïd offers to accompany her to her house. She accepts without hesitation and unburdens herself before him. She unfolds her broken marriage; Said is moved by her story and her beauty...

Omar Mouldouira was Born in Paris in 1973. He studied at La FEMIS, where he received his diploma in Sound Engineering in 1999. He worked on several soundtracks for shorts, feature films and documentaries. But his attraction for writing and directing finally pushed him to direct his own short movies. He participated in numerous writing workshops (Robert Mc Kee's STORY Master Class). He has developed several projects, including "The Dodger," a feature film screenplay for which he won two awards.