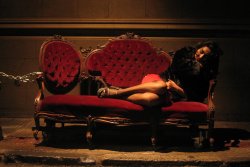 An old widower carries a red couch through the streets of Santiago City. Every night a tired hooker walks around his neighborhood. Tonight, both of them will find the affection they were looking for.

Nimrod Amitai is a half Israeli half Chilean filmmaker who lives in Santiago, Chile. He studied in UNIACC Film School where he managed to write and direct five short films and three video clips. He received an MTV video music award nomination and several prizes on his fourth short film "Searching for Aristotle". Currently, he is directing an adaptation of T.V' s sitcom "The Office" and writing his first feature film.

Director Nimrod Amitai will be available for Q&A after the screening.