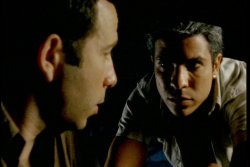 Rami was never troubled by much till that day in the park when his daughter was bitten by a dog. Since then, he is consumed with guilt. Was I at fault? Did I not protect her? Was it my weakness which caused all this? Haunted by feelings of inadequacy, he agrees to a plan proposed by his best friend Mickey - kill the dog, before it harms another little girl. Out of his element, drawn towards a darkness which he did not know existed, Rami begins to walk down a slippery slope, whose consequences are nothing but dire...

Dan Chyutin is an alumnus of Tel Aviv University's Film and TV Department and of NYU's MA program in Cinema Studies. He has written and directed short fiction and avant-garde pieces which have been shown in various Israeli and international festivals.

Director Dan Chyutin will be available for Q&A after the screening.