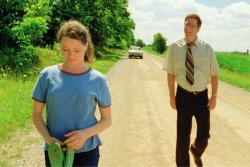 Adapted from a short story by award-winning author Joyce Carol Oates, Small Avalanches is the gripping tale of a teenage girl's dangerous encounter with a middle-age man. Set in rural Ontario in the mid-1970s, Small Avalanches follows Nancy, a surly 13-year-old as she tries to find something to do on a hot summer day. After pestering her mother for some change, Nancy heads to the rundown garage where her uncle works. She walks aimlessly around the car wrecks and gas pumps, and grumbles jealously about her cousin with a babysitting job. Finding no sympathy from her uncle, Nancy returns home in the suffocating heat along a deserted road. When she is accosted by a strange and aggressively charming man who follows her from the garage, the teenager becomes confused-at once intimidated and flattered by the man's attention. As his intentions become clear and his manner menacing, Nancy escapes the would-be molester by forcing him to chase her through the forest.

Lara Fitzgerald is an award-winning filmmaker. Her film "Remembering Memory" won Best Director and Best Documentary at the 1998 Hot Docs Film Festival. "Scenes From Childhood," a short, won several awards including Best Cinematography at the Toronto Worldwide Short Film Festival of 2002. Lara's films have played in festivals around the world including at the Toronto and Mannheim Film Festivals. Currently, Lara is developing two feature films including another adaptation of a story by Joyce Carol Oates.