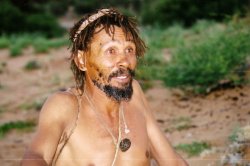 When South African filmmaker Rehad Desai travels to the Kalahari to investigate global interest in ancient Bushmen knowledge, he meets Jan van der Westhuizen, a fascinating Khomani San traditional healer. Jan's struggle to live close to nature is hampered by centuries of colonial exploitation of the San Bushmen and of their land. Unable to survive as they once did hunting and gathering, the Khomani now live in a state of poverty that threatens to see the last of this community forever. One plant could make all the difference. Hoodia, a cactus used by Bushmen for centuries to suppress appetite, has caught the attention of a giant pharmaceutical company as a weight-loss option for westerners. It now stands to decide the fate of the Khomani San. Bushman's Secret features breathtaking footage of the Kalahari landscape, and exposes us to a world where modernity collides with ancient ways, at a time when each has, strangely, come to rely on the other.

Rehad Desai completed a history degree at the University of Zimbabwe where he lived for three years. In 1996 Rehad entered the TV and film industry as a Producer and focused much of his energy on historical and socio-political productions. In 1997 he completed his Masters Degree in Social History at the University of the Witwatersrand. In 2000 he completed a postgraduate degree in TV and film producing through AVEA. His previous documentary, Born Into Struggle, screened internationally and garnered several awards. Currently, he is developing a feature film entitled Free Heart, a coming-of-age story about a father and his son in Mozambique.