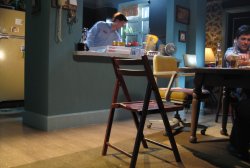 Four friends have invited a fifth player to join them for their weekly poker game. Will the new guy survive the night?

Ryan Levin grew up in Los Angeles, then moved to Philadelphia, where he attended the University of Pennsylvania. He then headed to New York, tried to find himself, came up empty and headed back to Los Angeles, where he currently dreams of moving back to New York.