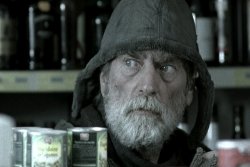 Manu, a homeless man living on the streets on Christmas eve, finds some pieces of porcelain in a trash can. He carefully reassembles the fragments to find they form a statue of dog which he keeps as a confidant. The day before Christmas, an event occurs that will pierce Manu's (and his dog's) life deeply.

Fred Gasimov was born in 1979 in Baku, Azerbaijan. After receiving his Bachelors Degree in Business Administration, he moved to France to complete a Masters Degree in Business Administration. In 2004 Fred decided to follow his passion and enrolled in the Director's study program at the EICAR Cinema school. "BARYE" is his first short film; his second film, "V10-47," is in post-production.