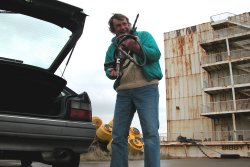 A BIT ON THE SIDE

A Bit On The Side is a wry story that tries to find some sense in one man's obsession with drills. Tony is fixated with drills of all shapes and sizes. As we follow him on his search for drills to add to his ever-increasing collection, we slowly unwrap the logic behind this strange and amusing obsession.

Steve Sullivan has been a filmmaker for ten years as a writer/director. A Bit On The Side is the first time Steve has directed from another writer's script. In his capacity as both writer and director Steve has previously made numerous award winning short films. The best known of these is A Heap of Trouble, which won the Grand Jury Prize at the Montreal Comedy Festival, a BAFTA Cymru for Best Short Film, Best Short Film at Berlin Interfilm and was officially selected for International Critics Week at the Cannes Film Festival. He has recently directed a sitcom and his first music video. For more of Steve's work visit www.stevesullivan.co.uk