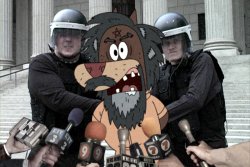 Golden Age is an animated dark comedy revealing the sordid lives of eccentric cartoon characters from yesteryear. Ten segments highlight the stories of animated entertainers as they struggle to succeed as animation superstars. From Jerome the Gumdrop to Antsy and the Bugaboos, Golden Age uncovers the seedy underbelly of the world of cartoons.

Augenblick has directed numerous award-winning independent films, including Ramblin’ Man, The Wire, and Midnight Carnival. He wrote and directed the 2007 short film Golden Age, which was an official selection of the Sundance Film Festival and won the Grand Prize in the Ottawa Film Festival. In 2019, Augenblick celebrated his company’s 20th anniversary with screenings and talks across New York City.

Lately, Augenblick has focused on developing his own original content. He currently has shows in development at HBO Max, Adult Swim, TBS, Paramount, and PBS. He created the horror-comedy series Death Hacks for Snapchat, which debuted in 2020 to critical acclaim. He recently created his first children’s show, City Island, which is being produced at PBS Kids.

Augenblick’s unique vision has established him as one of the leading animation directors in the world.

Director Aaron Augenblick will be available for Q&A after the screening.