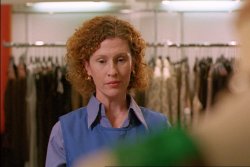 Sheila, Maggie and David work late shifts in a department store. Overexcited Maggie heads off on holiday leaving Sheila behind yearning for some excitement. Meanwhile jobsworth David struggles to remember how to have fun. Yet another night shift at the department store seems destined to bring more of the same drudgery.....

Cathy Mooney has worked for six years in film production throughout Ireland including working with directors Ken Loach (The Wind that Shakes the Barley) John Crowley (Intermission) and Neil Jordan (Breakfast on Pluto). Her first short film script Déjà vu was one of three scripts choosen from 150 entries in the 2002 RTE/Filmbase awards. Déjà vu was screened on RTE and at the Galway Film Fleadh in 2004. Not a Word is Cathy's third short film as writer and director. Filmed in Belfast in 2006 the film is funded by the Northern Ireland Film & Television Commission and produced by Belfast company 4 x 4 Productions.