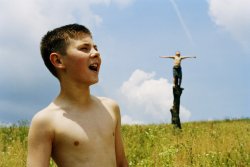 THE WAY WE PLAYED

On the eve of war in Bosnia, two boys go looking for treasure in an abandoned hillfort oblivious to the encroaching danger. Instead of gold they find a gun and overnight both their lives are changed forever.

Samir Mehanovic was born and brought up in the Bosnian town of Tuzla where he established a successful career in theatre and film. When war broke out in 1992, he continued to work with children as a theatre director until circumstances forced him to flee to Scotland in 1995 where he now works in film and theatre. His short film 'Game Over' was awarded the best Master Degree film at Edinburgh College of Art in 2004. He graduated from the Edinburgh College of Art with a Master of Design in TV/Film in 2004 and is currently working on a feature film script.

July 2005 was the 10th anniversary of Srebrenica, the worst holocaust in Europe since WW II, in which over 8,000 people were killed within a few days. The Way we Played, tells of the destiny of one such Bosnian family. The short film is based on my own real experiences of war and tells about the tragedy that happens to the most innocent - the children.