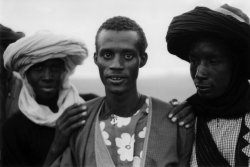 THE RIVER WHERE WE LIVE

The interior delta of the Niger River in Mali. The river crosses a vast plain in the heart of the Sahel. It is a vivid patchwork of canals, rivers, lakes, islands, seas, prairies and flood zones. Throughout this territory, human societies have learned to live together, in a symbiotic relationship with the cycles and movements of the river. During the dry season, as water levels began receding, I went to encounter the people of the delta - artisans, merchants, navigators, herders and fishermen - leaving in search of a human portrait of the river.

Sylvain L'Espérance (b. Montréal, 1961). Studied visual arts at the Université du Québec à Montréal (UQÀM) and then film at Concordia University. In 1992, he directed "Les printemps incertains", a documentary portraying the decline of a working-class Montréal neighbourhood, which already revealed his concerns with both social and formal issues and his use of certain effects related to experimental film. He explored the theme of work in "Le temps qu'il fait" (1997), and "La main invisible" (2002), shot in Guinea, where the world of artisans and the transformation of raw material are symbolically extrapolated into dance. He followed with "Un fleuve humain" [The River Where We Live] (2006), adding to his roles as producer and director that of director of photography, which he had occasionally done before.

I wanted this film to show the diversity of human activity accommodated by the interior delta of the Niger River. I approached men and women who, day after day, travel and shape this territory, some nomadic, others sedentary: fishermen, artisans, merchants, herders and navigators. The nature of each métier practised here is determined by its particular relationship to the river, the cycles of ebb and flow, the shifting seasons. The people's relationship with the Niger River lies at the very heart of all the encounters I forged for this film. As editing developed, the speech and gestures of work were married to the movement of the river and, from one encounter to the next, they wove a tale of the delta. To the burgeoning ways of life deployed over this territory responds the richness of Malian speech. Speeches, I should say, since this region is home to such varied cultures as Peul (Fulani), Songhai, Bozo, Bambara and still many others. These modes of speech, in their multiplicity, each identify the «belonging» of Malians to the territory of the delta. Men and women of various cultures live together peacefully in Mali. In the interior delta, their shared territory changes vocation according to the seasons. A single place can be successively exploited by Bozo fishermen, Fulani herders and Songhai farmers. This reality exists in today's West Africa, far from the murderous fighting that ravages many other African countries. There exists an Africa other than the one beset with misery and warfare, and this reality can help us recognize what it is that can make peace possible.

Director Sylvain L'Espérance will be available for Q&A after the screening.