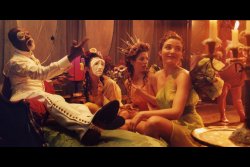 Alone in his apartment, an old man is listening to his neighbors partying. The old man is grasping every sound. He is watching too, through the countless peepholes that are scattered on his walls...

Nicolas Bary has worked on numerous feature films as a technician, but never left aside his own projects, making three short films in the past four years. From a family of classic musicians, Nicolas holds music as an essential part of film making. He plays the violin, the clarinet and the bass and maintains a creative association with Jean-Michel Ferran who composed the original soundtracks of his films. While developing his first feature with « Chapter 2 », Nicolas has made three advertising films for trademarks such as Total and Kinder.