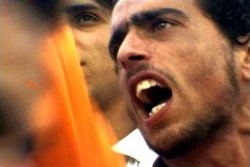 THE ABC'S OF FOOTBALL

This film depicts the Israeli society as reflected through the behavior of football fans. The director had mingled with fans of teams from different regions of Israel. He documented their reactions and vocal-expressions during the football-matches, which, generally, have very little correlation with what occurs on the field. The film has 22 themes each starting with a Hebrew letter in an alphabetical order. It begins with the more positive phenomenon and gradually proceeds towards the worse ones. Each section opens with a short fictional scene inside the boxing arena, where the director is fighting against a personified football. This reflects the director's personal feelings towards the events and the atmosphere during the football matches.

Itamar Rotem worked as a director, producer and scriptwriter for the promo of the graduating students program at Camera Obscura Film School. He has received a grant from the Eli Galfend Foundation for a drama-script. The ABC's Of Football was chosen as one of the best final graduating films of the Camera Obscura Film School. The shooting of this film began in 1998, when Benjamin Netanyahu the right-wing leader served as the Israeli prime minister, and ends in 2000, more than a year after the election that threw Netanyahu out of office and replaced him with Ehud Barak the left-wing leader.