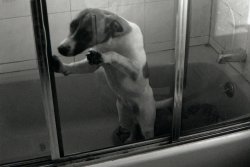 Surrounded by his overflowing "home run" animal shelter, "Mighty Mutts," Jon Contino is rescuing dogs and cats (and birds) from the streets of Brooklyn while his relationships with his neighbors, his live-in volunteer, and his girlfriend are falling apart around him. An intimate look into one man's love affair with animals - or, what happens when you share your home with 200 cats, 40 dogs, 5 pigeons and two other humans.

Anne is a native of Northfield, Minnesota. She moved to New York to attend NYU's graduate film program, where she will graduate with an MFA in spring 2002. While at NYU, Anne received the Martin Scorsese Young Filmmaker Scholarship. In addition to Gas Up & Save!, Anne has directed one other narrative short film, The Greatest Show on Earth, and two short documentaries, Mighty Mutts and Miss Alabama Nursing Home. She is currently writing a feature, 100% American.