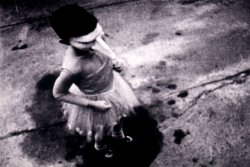 THE GREATEST SHOW ON EARTH

Amidst his dilapidated and obsolete carnival surroundings, a dwarf abandons his life at the sideshow to hang himself. Seeking solace, he is instead confronted by specters of exploitation and mockery, in what proves to be his greatest act yet.

Anne is a native of Northfield, Minnesota. She moved to New York to attend NYU's graduate film program, where she will graduate with an MFA in spring 2002. While at NYU, Anne received the Martin Scorsese Young Filmmaker Scholarship. In addition to Gas Up & Save!, Anne has directed one other narrative short film, The Greatest Show on Earth, and two short documentaries, Mighty Mutts and Miss Alabama Nursing Home. She is currently writing a feature, 100% American.