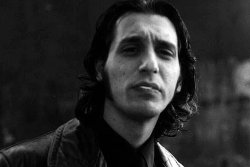 Frank Rivers dreams of becoming an artist. He believes that if he works hard enough, trying every art-form on the planet, he will have success. But life as a struggling artist is poor and being from a rough neighborhood in Brooklyn doesn't make it any easier. Trying to finance his career he borrows money from a friend of the family. But there's a problem: the friend is a sworn member of the mob.

Erik Eger, born in Sweden but in love with Spain, where he lives at the moment, has directed commercials and music videos for almost ten years. The Artist is his first short film. It was shot to complete his Certificate of Directing at New York University. It features famous Swedish rapper Amir Chadmin.