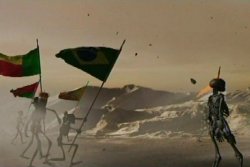 Jerky but smiling characters from this short film take the audience through an animated pageant inspired by Thomas Hobbes' "The Leviathan," written in 1651.

Simon Bogojevic-Narath was born in Croatia in 1968. After studies at the Academy of Fine Arts, University of Zagreb, where he qualified in 1992, he became a member of the Croatian Artists' Association (HDLU). In 1990, he started working on video, videotapes and video installations and exhibited at various exhibitions and festivals in Croatia and Europe. He began working with 2D and 3D computer animation in 1993, when he also formed a media art group FX Interzone which produced computer generated music videos for a number of TV stations. In 1995, he produced a short experimental video, Hand of the Master, which won an award at the 24th Youth Salon, Zagreb. He became an art director in Kenges, a Zagreb based company. Between 1997 and 1999, he produced an experimental video-film, Bardo Thodol, based on the Tibetan Book of the Dead, which won the Oktavijan Award for best experimental video-film at the Days of Croatian Film and Video in 2000. Since 2004 he has been a member of the core faculty at the Arts Academy, University of Split lecturing on Electronic Animation and Academy of Fine Arts in Zagreb. He is the author of several short experimental and animated films, some of which won international awards.