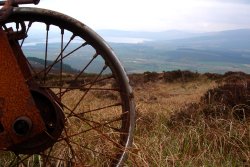 This documentary is a personal exploration into the life of the Director's father, Jim Kennedy, a 68-year-old turf cutter attempting to come to terms with his aging body and a changing way of life.

Niamh Kennedy graduated from the Dublin Institute of Technology in 2006 with a first class honours degree in Media Arts. Her graduate documentary, An Ember's Glow, won best documentary upon its first screening at the Kerry Film Festival, Ireland. She has also produced another short documentary, Swirl, which has screened throughout Ireland and has received its international premiere in April at the Britspotting festival, Berlin. Niamh has worked as a runner and development researcher for the leading film company in Ireland, Element Films, and currently works as development researcher for Independent Pictures, one of the leading producers of factual television and documentary in Ireland.