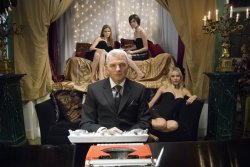 A rectangular black obelisk, intellectual property lawyers from hell, the most gratuitous lesbian kiss ever, five Brooklyn bands, aesthetic transcendence through selling out, something about Stanley Kubrick, and Mike Birbiglia.

Per Anderson had his mind warped at an early age when PBS ran the entire Monty Python catalog for 14 days straight during a winter school break. STANLEY CUBA is his debut feature as writer/director. Previous credits include Police Beat as 1st Asst. Director (Sundance 2005). Per studied film production at the University of Melbourne, Australia and woke up in Brooklyn after a botched "rendition" flight from Rarotonga.