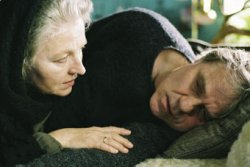 In Hans Steinbichler's Winter Journey, actor Josef Bierbichler is a force of nature - a big, belligerent man with even bigger problems. Suffering from manic depression, this formidable fellow's increasingly erratic behaviour eventually takes him on a gruelling psychic - and geographic - journey that leaves him stranded and alone to face his demons. Franz Brenninger (Bierbichler) is a sour but successful German hardware company owner of about sixty who lives with his wife, Martha (the always marvellous Hanna Schygulla, impressive in a small part handled with great sensitivity). Perhaps sour is an understatement: Franz is a boor. When he is not in the pits of sorrow, he is on a manic high: he blasts loud music and drives recklessly, blows more money than he has on hookers and calls everyone an asshole - including his long-suffering grown children and Martha, who is slowly going blind. In his manias, everything seems possible and he throws caution to the wind. One day he receives a letter from a Nairobi businessman, who promises him a considerable commission if he lets the man deposit a huge sum into his account - but Franz must put up some money first. As Franz's personal and professional life is falling apart around him, with his wife and children getting inscreasingly desperate (especially Martha, who requires an urgent operation), he decides to take the gamble. But when Franz puts up the fifty thousand Euros, he soon realizes he will never see it again. After recovering from an enraged episode of such violence that the screen itself seems to shake, Franz heads for Africa to retrieve the money with the help of his friend, a young Kurdish translator named Leyla (Sibel Kekilli). Inspired by German Romantic painting and Schubert's masterful "Winterreise" song cycle (which plays a key role in the film), Winter Journey is a suitably melancholic and majestic story of a man in crisis, shot through with pitch-black humour. Echoing his racist and rancorous anti-hero's psychological seesaw, Steinbichler alternates between closely framed, hand-held camera shots of Franz, and the panoramic landscapes of wintry Bavaria and scorching Kenya. In his wide-brimmed black hat and overcoat, Franz is the kind of larger-than-life, inflammatory and ultimately tragic character that is an actor's dream: a man in his twilight who will sing his own tune, no matter the cost.

Before turning to filmmaking Hans Steinbichler (1969, Switzerland) studied law in Munich and and published photos and articles about the mountain world like his father, the well-known photographer Hans Steinbichler Senior. After graduating from the Munich Academy for Television and Film (HFF), Hans filmed several documentaries and shorts before directing his acclaimed feature debut, Hierankl. WINTER JOURNEY is Steinbichler's second feature film.