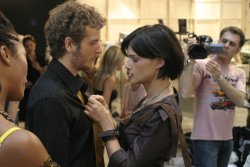 Cover Boy is the story of the friendship between Ioan and Michele respectively Romanian and Italian. The serendipitous encounter of two worlds apart: the travails of a young man, son of the Post-Communist Revolution, who flees his country in search of a better future and the travails of another youth who instead scrapes along the margins of a Western society that is unable to offer gainful employment to so much of its youth. In the background of this rapport between a simple Romanian youth and his marginalized Italian counterpart, there is a West which on one side is still feeling from the collapse of the Communist ideology and on the other, in the clutches of a Capitalistic myth which has increasingly assumed, as it propulsive force, harsh competitiveness and an intensification of social inequality. The film tells the story of their shared experiences on the fringes of a prosperous city (tormented by their landlady) and it illustrates how the savagery of a daily dog-eat-dog struggle for survival can be opposed by the bonds of genuine friendship. Ioan's encounter with a famous photographer, Chiara Caselli, and his misjudgment of an exploitive sentiment for love, will ultimately bolster his friendship with Michele and guide him to the destination of his on-going quest.

Carmine Amoroso (Abruzzo, 1963) moved to Rome in the early 80's where he earned a degree in Literature. Carmine has written and directed various journalistic inquiries. As a writer he appears in several short story anthologies. He is the author of the screenplay "Parenti Serpenti" directed by Mario Monicelli, a film acclaimed by audiences and critics alike, as well as the same-titled theater piece (staged for eight years in Italy and Spain). In 1996 he wrote and directed "Come mi vuoi," an Italo-French co-production (Embrasse-moi Pasqualino) and the first Italian film delving into the realities of the transgender community. The film launched the duo of Monica Bellucci and Vincent Cassell, which subsequently gained worldwide notoriety.

Producers Arturo Paglia and Isabella Cocuzza will be available for Q&A after the screenings.