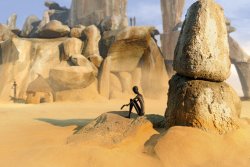 In a village, a young blind man, victim of a storm, will be iniated by a women to overcome his fears. Thanks to the musical quality of a flute, he will be able to exorcize their fears of the villagers and to offer a different perception of the natural elements.

Having completed a degree in Applied Art, a certificate in Visual Expression, and training in 3D imaging, Stephanie Machuret started off her career as a 3D graphic artist for the video game "L'île du Dr Moreau" for Haiku Studio in 1995. In 1997 she joined a post-production audio-visual company MacGuff Ligne in Paris, where she concentrated mostly on 2D special effects in both film and television. At the beginning of 2004, Stephanie decided to write and develop her own short animated film, "Matopos." In June 2004, the project was selected for the "Lauréat du concours de projets" at the International Short Animated Film Festival in Annecy France where it received the Arte award.