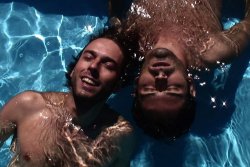 Suddenly Last Winter is the story of Gustav and Luca. Their life changes when the Italian government presents a draft law that would give rights to unmarried gay couples, prompting a wave of homophobia in Italy. The Vatican and conservatives fight against it, preaching that the end of morality and the family are nigh if the legalization on civil unions is not blocked. Together as a gay couple for over eight years, Luca and Gustav want to understand the different positions and, with their film, undertake a journey into a country they did not know before and did not expect to find: their own.

Gustav Hofer was born in 1976 in Sarnthein (South Tyrol, Italy). After his studies in Communication Science at the University of Vienna and Cinema at the Middlesex University in London, he moved to Rome. He works as a free-lance journalist and independent filmmaker. For the French-German television "Arte" he presents the daily culture program "Journal de la Culture - Arte Kultur" and for the same program he works as the culture correspondent from Italy.

Luca Ragazzi was born in 1971 in Rome and graduated in Literature and Philosophy at the University La Sapienza of Rome. She is a journalist, film critic and photographer. "Suddenly, Last Winter" is his first Film as a director.

Gustav Hofer and Luca Ragazzi will be available for Q&A after the screening.