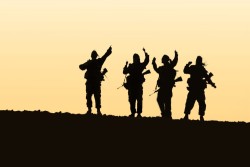 Seven years after completing the Israel Defense Force (IDF) training for female combat soldiers, the director returns to the place where, for the first time, she fell in love with a woman - her commanding officer. Over the course of 66 days and nights, this documentary follows the teenage girls in one of the IDF's most rigorous combat courses and looks at the relationships that develop between girls in an environment subject to strict military code. The film reveals the mechanism that enables the transformation of 18-year-olds from "daddy's little girls" into fierce disciplined soldiers. Through the intimate relationship that develops between the director and one of the characters, questions about identity, sexuality and the discovery of femininity surface.

Hen Lasker was born in 1980 in Israel and graduated in 2005 from The Film and Television School at Sapir Academic Collage. Hen has directed a number of short films, both narrative and documentaries, as part of her studies. Seeds of Summer is her debut feature film.