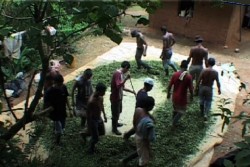 ABC Colombia is an intimate portrait of a small rural community in a part of Colombia entirely controlled by paramilitary forces, rendered through the eyes of the children who grow up there and are often forced into very difficult choices. This documentary follows the young protagonists in this problematic setting through an entire school year, exploring some of the realities that nurture and perpetuate the violence in Colombia. How do these children - often from families destabilized and uprooted by the conflicts and who, even while holding weapons, nonetheless remain children - grow up? What kind of future do they see for themselves? How do they confront a reality too large and complex for them?

Enrica Colusso was born in Rome where she went to University (Film Studies), and started her career as a filmmaker. In '88 she moved to Paris, where she lived for two years and attended documentary workshops at VARAN - (the Jean Rouch school of documentary). In '95 she graduated from the National Film and Television School (U.K.) after a three-year post-graduate course in Documentary Filmmaking. Since 1994, she has devoted a few months each year to teaching documentary filmmaking in England (Four Corners), Colombia (Universidad Jorge Tadeo Lozano, Bogotà) and Norway (Tromsø University, Faculty of Visual Anthropology). Since 1997 she's been one of the company directors of Radix Films, a U.K. based independent production company specializing in Documentary Filmmaking.