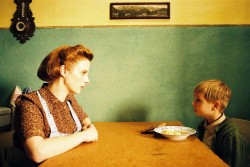 Germany 1942: In order to protect her son Marianne Meissner tried to make him believe that the Jewish neighbours are going on a journey to "Toyland". One morning her son has disappeared - the Jewish nighbours too. TOYLAND is a film about guilt, responsibility, small and big lies.

Jochen Alexander Freydank was born 1969 in East Berlin. He directed fringe theater, commercials and short films. He started his film career as first assistant director and editor before he became a screenwriter for TV an Film. At present he works as a producer of a TV series and prepares his first feature film as a director.

Director Jochen Alexander Freydank will be available for Q&A after the June 2nd screening.