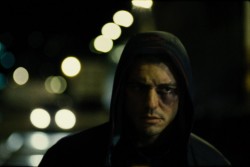 "Out of Bounds" is the story of Mike, a young Italian boxer from Trieste. A troubled man, like many of his peers, Mike is thirty years old and still a dreamer. His dream, shared by his sister Anna, is to become a champion. But, as often happens, life is harsh, bitter, and full of hidden dangers. Mike falls for the allure of these dangers, and starts earning money in illegal fistfights. Eventually, he decides the world of illegal fighting is not for him, but getting out will be harder than he ever imagined.

Fulvio Bernasconi was born in Lugano, Switzerland in 1969. After studying political science at Geneva he took on film studies and graduated from Andrzej Wajda Master School of Film in 2004 after earning his film diploma at the Lausanne Art School. His first short film "Bad Trip to Mars" won the newcomer prize Leopard of Tomorrow at the International Film Festival of Locarno 1996 and was selected to many festivals including Cannes, Toronto and Tel Aviv. Having directed numerous documentaries and TV movies, "Out of Bounds" is Bernasconi's first feature film.