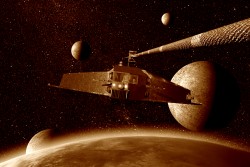 Strange symbols have been interrupting television broadcasts for days. Nobody knows who sends them, and the media begins to wonder about the nature of the phenomenon that threatens to spiral out of control with each passing day. Meanwhile, young scientist Bobby Joe discovers a mysterious cable deep in the woods that reaches toward the stars. Determined to follow its path, Bobby Joe and his co-pilot Jim Bob build a galactic gondola, the Apollo 54, that will carry them on an adventure into the above.

Giordano Giulivi is one of four founding members of The 54 Group, who have been active in the amateur cinema field since the early nineties. Their films are characterized by strong experimentation and by the will of realizing stories out of Italian cinematographic standards. In 2007, after a work that took over 4 years, they completed their first self-produced feature film, "Apollo 54."

Producer Luca Silvani will be available for Q&A after the June 7 screening.