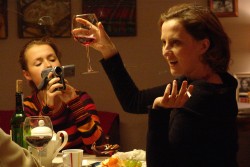 Monika is a 35 year old single mother who lost her legs in an accident two years ago. Her 18 year old daughter, Julia, makes a film entitled What it's like to be my mother as part of a school project. The film is unexpectedly selected for a festival of disability and art. Monika thought her biggest fear was seeing herself on screen as a woman in a wheelchair, but finds it a greater challenge to accept that her daughter is now a woman, who must soon go her own way. A mixture of pain and humour, and dignity and weakness, this is a simple story of love between a mother and daughter.

Born on 30 July 1976, in the North West of Ireland, Norah Mc Gettigan is a theatre graduate from the Universtiy of Ulster. On completing her studies, she travelled to Eastern Europe where she worked as a teacher for several years before commencing an M.A. program in film directing at The Polish National Film School. Her films have won numerous awards worldwide and were selected for the Cinefondation student film competition at Cannes. Norah is preparing for her feature film debut, which she hopes to shoot in 2008.

Director Norah Mc Gettigan & Co-producer Malcolm Mc Gettigan will be available for Q&A after the screening.