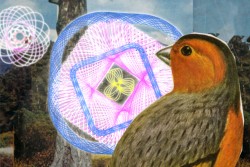 Canaries is a nostalgic pastiche of found graphic material from AV learning programs of the 1970s. The birds take on a life of their own as the viewer is taken on a psychedelic journey through a book of canaries. The animated excursions vary from scrolling landscapes of the Scottish highlands to the Waitomo Caves of New Zealand.

Jill Kennedy was born 1981 in Glasgow, Scotland. In 1982 her family moved to Auckland, New Zealand. She has been living in Auckland where she graduated from a Graduate Diploma In Design in 2006. Prior to this Jill completed a Bachelor Of Design majoring in Painting in 2002. During her studies in 2006 Jill produced her first short film Neuro Economy, an experimental animation to an audio recording found on a telephone answering machine. Jill has exhibited work at Public Galleries, Institution Galleries, Dealer Galleries and Artist Run Spaces in New Zealand and America. Jill's recent animation work has screened at International Film Festivals around the world, including the Worldwide Short Film Festival 2007. In 2007 Jill began collaborating with New Zealand painter Mark Braunias, producing animations of his drawings for exhibition. Through continuing experimentation with animation, Jill developed the concept for New Educational Series.