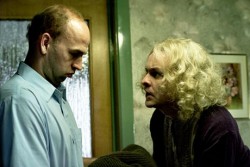 Lubbert Das lives together with his domineering and omnipresent mother somewhere in a remote corner of Flanders; a place where seemingly time has stood still. Afflicted by a speech impediment, he leads an isolated existence in his own hermetic little world, essentially a vacuum perpetuated by peculiar personal rituals and banal routines. Venturing out into the fields and forests of the region, he encounters a world as unsettling and impenetrable as his own. The decaying remains of an unidentifiable creature, a mentally disturbed watchdog, the burnt remnants of a violent bacchanal and unruly local flora set the scene early on during his outing. At the edge of a forest he happens upon a group of nature enthusiasts lead by a charismatic guide. A misunderstanding quickly results in a harrowing pursuit and the violent and nonsensical beheading of the demonic guide. In the hours that follow, Lubbert promptly appointed as witless leader of the fervent group of followers, will find himself caught up in the midst of a confused and tragic spectacle of religious proportions.

Marc Roels (1978 Johannesburg) studied animation at the Royal Academy of Fine Arts in Ghent. Marc has garnered several international prizes and nominations for his short animation film "Concern" (2001). He works as commercial director. Wim Reygaert (1974, Ghent) was the driving force behind disbanded Belgium-based collective WORK. Films, producing commercials and music videos as well as short films such as "Forever" (2005) by Jonas Govaerts and "Weight" (2006) by Michael Borremans. Mompelaar is his first fiction short.