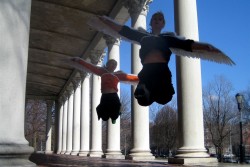 Two women bat their wings, preparing to take off. They practice the dream of flight.

Rosane Chamecki and Andrea Lerner moved from Curitiba, Brazil to New York in 1989, after graduating in Dance. Once in New York, they started their choreographic career. During their 15 years collaboration they have created more than 10 evening length dances to much critical acclaim. ChameckiLerner's dance work has been presented in various international dance festivals and venues. In 2007, they premiered "EXIT" at The Kitchen in New York. This piece was a good-bye to their dance career. Flying Lesson is their first film.
Philip Harder has directed more than 200 music videos, numerous short films, and commercial projects for clients such as iPod, Sprint, The Gap, Target, and Hewlett Packard. His credits include music videos for PRINCE, FOO FIGHTERS, INCUBUS, ROB THOMAS, HILARY DUFF, LOW, PULP, BARENAKED LADIES, LIZ PHAIR and YELLOWCARD, all of which feature Harder's unique visual experimentation. Harder has earned several top distinctions including an MVPA award for Best Alternative Video, MTV Awards video nomination, an AICP Video, SXSW short film award, and a nomination for MVPA's Director of the Year. In 1996 Phil worked with Chamecki-Lerner creating films for their dance performance Please Don't Leave Me.

Directors Andrea Lerner and Rosane Chamecki will be available for Q&A after the screening.